Symptoms, Causes And Solutions For Psoriasis Symptoms, causes and solutions

Psoriasis is a common chronic inflammatory skin disease, which tends to follow a course of remissions and exacerbations. The most frequently occurring type of psoriasis has distinctly demarcated ‘plaques’ which can be either pink or grey in colour with overlying silver-like scaly skin. These plaques can also cause localised Hyperpigmentation. Symptoms may first appear at any age, however, they are most likely to appear in the early stages of adulthood, or in later life, around 50–60 years of age.

Psoriatic lesions are biologically distinct from classic dry skin also known as Xerosis, and are classified as erythrosquamous, meaning both blood vessels and deeper epidermal skin layers are involved. Deficiencies in cell regeneration are the cause of so called plaques. These deficiencies are caused by multiple factors:

Plaque Psoriasis (Psoriasis vulgaris) is the most frequently occurring form of Psoriasis, accounting for around 80% of cases. It appears as red-coloured lesions which are usually raised due to being inflamed. They can also be covered by layer of silver or white scaly skin. These lesions are typically found on areas like the knees and elbows, scalp or lower back.

Guttate Psoriasis is characterised by ‘guttate lesions’, which are small red-coloured spots that appear on the body or limbs. They are usually not as raised as plaque Psoriasis lesions. Guttate Psoriasis can first start in childhood or the early years of adulthood, and can appear suddenly.

Inverse Psoriasis appears as bright-red, lesions which are not rough but rather smooth and shiny. They are mainly found in skin folds and tender areas like the armpits and other skin folds such as the groin or under the breasts or buttocks. These are also the areas that can become irritated due to friction and/or sweating.

Pustular Psoriasis is predominately seen in adults, and is characterised by white blisters of pus (which is non-infectious as it consists of white blood cells). These blisters may have reddened skin around them, and may be localised or widespread.

Erythrodermic Psoriasis is mainly inflammatory in nature and therefore often affects the majority of the body’s surface. Extensive skin redness results in scales being shed of in large sheets, which causes severe pain and discomfort.

Psoriasis – what causes it?

Genetics
Studies indicate that the most cases of Psoriasis may be inherited, due to the incidence of Psoriasis among the families of affected individuals. It is thought that certain inherited genes may be linked to Psoriasis, but the exact way this happens is not yet understood.

Infections
Infections are often involved in the development of psoriatic symptoms. Bacteria, particularly Streptococci, are the most commonly implicated pathogens, and are linked to Guttate Psoriasis. Human immunodeficiency virus (HIV) infection, although not a direct cause of Psoriasis, is known to increase the likelihood of developing more severe Psoriasis, if the person already has Psoriasis.

Stress
Psychological stress may worsen the condition, and, in some cases, may be enough to trigger it.

Medication
Some medications, particularly lithium, antimalarials and beta-blockers, have a negative effect on Psoriasis. Suddenly stopping therapy with strong topically applied or oral corticosteroids is likely to cause ‘rebound’ symptoms, which can be severe and may even result in erythroderma or even generalised pustular Psoriasis.

Topical therapies for Psoriasis consist mainly of emollients, moisturisers, keratolytic agents and cortisosteroids. Moisturising products and emollients are mainly beneficial in the intermediate or remission phases of Psoriasis. During the initial keratotic phase Keratolytic agents are most beneficial, and can be used in conjunction with moisturisers and emollients. Topical corticosteroids are effective at all times, however, they should not be used continuously for long periods, so it is often beneficial to reserve these for flare-ups (exacerbations).

Emollients are used to make the stratum corneum more supple and reducing superficial scales. They are the most commonly used products in dermatology. They work by generating an occlusive film that reduces the amount of water-loss from evaporation from the skin which allows the surface skin layer, or stratum corneum, to become adequately hydrated.

Moisturisers are emollients that are enriched with natural moisturising factors (NMFs). NMFs also increase stratum corneum hydration as the NMFs attract and bind water. More advanced moisturisers also contain actives, such as Gluco-glycerol, which increases hydration in the deeper epidermal layers of the skin by activating skin´s own moisture networkthat supplies water to the upper skin layers.

Regular use of emollients and moisturisers is important, and should be continued during both, a flare-up or remission.

Thicker, more occlusive creams and ointments are preferable to lighter lotions, as they are more effective.

Urea is another commonly used keratolytic agent, and it is also included in many moisturisers such as the Eucerin Urea range as it is also part of the NMF and helps to bind water in the skin.

Topical treatment like emollients, moisturisers, and keratolytic agents are essential for the treatment of Psoriasis. They support the efficacy of any systemic drug therapy.

Topical corticosteroids have anti-inflammatory properties, reducing the rate of plaque formation and the irritation that comes with it. Moderate strength topical corticosteroids are often used for Psoriasis on the face, genitals, or areas that require stretching or flexing, in combination with other topical agents, especially emollients and moisturisers.

Vitamin D analogues are often one of the first topical treatments used for typical chronic Psoriasis. 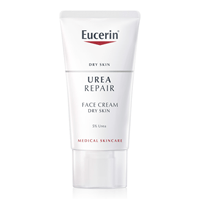 This light face cream for dry to very dry skin instantly moisturises and soothes tightness to give the skin a smooth and supple feel.
More Details 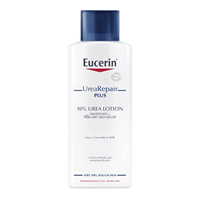 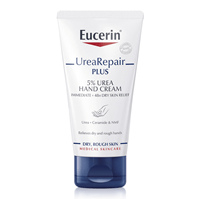 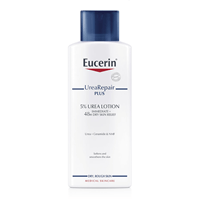 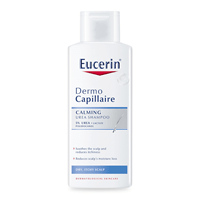 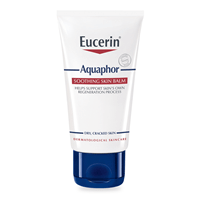 This intensive leave-in formula for a dry and itchy scalp provides hours of intensive moisture to soothe and calm itchiness and irritation.
More Details